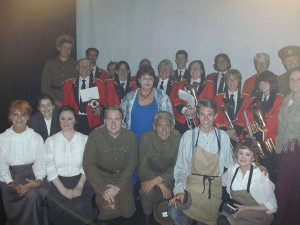 Some of the band took part in a fantastic production of "Accrington Pals" by The Anonymous Players at the Lowther Pavilion in Lytham. The show went down great with the audiences and also with the critics.............

"The mood of the evening was set from the moment we entered The Lowther Pavilion where the Blackpool Brass Band was playing a selection of World War One songs. These fine musicians were used throughout the play to create the different atmosphere as required.   The interpretation of “The Last Post” before the final curtain was very moving. Di Prutton, Director, is to be congratulated on giving us an insight into how the lives of all concerned were touched by this “War to End All Wars”." 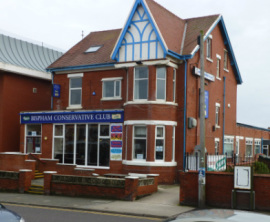 Blackpool Brass has now moved home, although we still have few bits to shift! Our new rehearsal room has been kindly provided by Bispham Conservative Club and our thanks to them for the work that has been done to turn what was 3 office rooms into a fantastic new space for us to rehearse.

Thanks all round to the lads & lasses from Blackpool Brass who have worked tirelessly to shift an enormous amount of gear from one end of Blackpool to the other. It will be worth it in the end!! 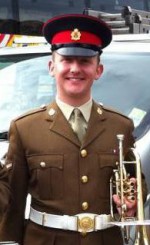 Blackpool Brass has seen a number of personnel changes with the addition of several new cornet players particularly but also the loss of Anthony & Shaunie from the bass section, they will be missed and we wish them well.

More notable perhaps was the sad resignation of our MD Tariq Ahmed. Due to new work and family commitments, the logistical problems of being in Blackpool twice a week were becomming more and more difficult to deal with. We would like to thank Taz for all his enthusiasm, dedication and hard work over the last 3 years, we'll miss you pal!!

On a brighter note, the band has appointed John Pearson as our new MD. John has recently been posted to the Kings Division Band at Weeton from the North East and so the timing of his arrival couldn't have been planned better! A more detailed resume will appear on the MD's page soon.

Since Brass at the Guild, Blackpool Brass has had 2 further contests, the North West Area qualifying contest at the Winter Gardens and in Buxton. It was a mixed bag of results with a very satisfying 5th place in Blackpool playing "Partita - Postcards from Home" and a rather disappointing 6th in Buxton with a rendition of "Resurgam". Contest season is now over and so we will be emabarking on a busy summer season of concerts all over the Fylde. Keep your eyes on our calender and feel free to come and support the band at any (or all!) of our engagements this year.

More recently we have strengthened the cornet section with the addition of Kathy, Jeremy, Matt, Colin & Hayley. A very warm welcome to them all, and George has rejoined the band after having a rest for the last 17 years!! And we are very sorry to see Anthony leave for new pastures - he will be sorely missed.

Congratulations to Sam Williams who has managed to secure a place at Salford College studying music and will be off at the end of Summer. Good Luck!! 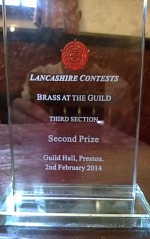 A good performance of the upcoming area test piece (Partita - Postcards from Home) gave the band an impressive 2nd place against strong opposition at Preston's Guild Hall this year.

Congratulations to our solo horn player Joe Latham who came away with the Best Soloist prize.