Another fine performance of "A London Overture" at the Northern Open in St Helens saw the band take the 3rd section prize. Simon Moore claimed the sections best trombone prize and Tariq Ahmed received a prize for being the conductor!! full reults A great day out for the band although it didn't begin well at the pre-contest rehearsal after we arrived at the venue without music stands!! Lets hope the recent good run of results cntinues at our next outing at the National Qualifiers in Blackpool next March! photo's

Our latest signing Katie Wright, who joins the band on Cornet. Katie will be making her debut with the band at the Northern Open on 18th November. Welcome to the band, Katie! 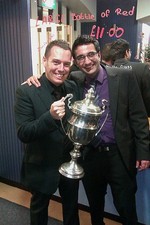 A cracking day out in Fleetwood was crowned by the band winning the 3rd section after a fine performance from being drawn 3rd. The day began with an early (ish) rehearsal and following a short delay in proceedings, the band got on stage and played the contest piece wonderfully. Of particular note were the soloists who, in the words of the adjudicator were "sublime". Well done to all. After collecting the trophy, the band returned to the Strawberry Gardens to celebrate their victory. photo's

From 4barsrest "There was plenty of quality playing on show in an enjoyable Third Section contest, which was eventually won by an impressive performance of ‘A London Overture’ by Blackpool Brass conducted by Tariq Ahmed. Precise and detailed, it claimed the Carol Baker Memorial Trophy and £400 first prize by repelling the challenge posed by a fine rendition of ‘Variations on a Chord’ by Eccles Borough". full results﻿ 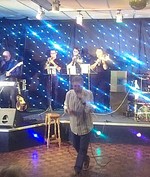 A fantastic concert performed at Bispham Cons for Phil's dad, Ted was followed by the John Scarlett Band aided and abetted by Phil, Perry & Simon. The short performance by the band went down a storm, Ted & others saying afterwards what a fantastic playlist and big sound the band had. Thanks to Perry O'Brien for the brass arrangements allowing us to play. 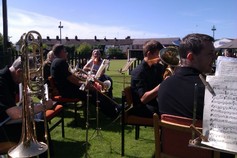 Unusually on August Bank Holday the sun came out for our annual concert at the Institute followed by a BBQ. This year, the club had also organised various "fun" activities including a buffalo rodeo, sumo suits and a number of inflatable bouncy castles and slides which were of course used by members of the band! video The hour long concert took place in glorious sunshine in the beer garden at the back of the Institute and our thanks go to the (many) deps who came along and helped us out in the afternoon. Following playing, a BBQ and several drinks were enjoyed by both members and guests in the warm sunshine. photo's﻿

Sadly for the band, Joe Hamilton has decided to hang up his BBb Bass (on a really big hook!). Having played for the band on and off for many years he will be sadly missed. We hope that he and Katy find plenty to keep them occupied on those now empty weekends and obviously they are both welcome anytime. Good luck and thanks Joe. "Potato!" 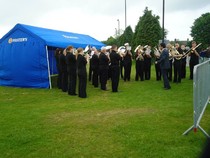 A highly and very succesful evening was had by the players and guests of Blackpool Brass in the Tameside area of the Whit Marches last Friday. The band set off from Blackpool at 4pm and began the evening at Aldwynians Rugby Club with their first performance of the contest march "Mephistopheles". video In all we played through 7 of the 11 contest venues in the area finishing in an incredible 14th place overall. gallery Of the 7 contests, we were placed 1st in 5 of them for the third section bands. The final venue was Dukinfield where the band enjoyed a few refreshments whilst watching the final few bands compete before heading home after another enjoyable years contesting. full results 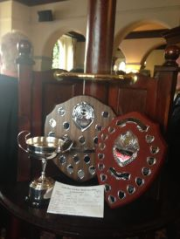 A day out for the band to Buxton Contest in the Peak District resulted in us winning 3 trophies. The band gained 2nd place in a strong field as well as winning the prizes for best Euphonium section & highest place North West band. full results. The weather was the only down side to a great day at a contest that we haven't taken part in for nearly 20 years! The bands performance of Dark Side of the Moon was very creditable with only a little insecurity in the opening to really fault. You can listen to a recording of the performance here.

The wonderful weekend weather was spoilt only by a disappointing result in the 3rd section at Dukinfield Town Hall. picture gallery The 4th place gained on the day was a fair reflection of the bands performance of Lovatt-Cooper's Dark Side of the Moon. Good soloists throughout the piece and a fantastic finish were two of the (many) good points appreciated by the adjudicator, but too many slips during the opening sections of the piece cost us a higher placing. full results

Although Blackpool Brass produced a fine performance of this years test piece 'Olympus', it was not to adjudicator Kevin Wadsworth's liking and we finished in a undeserved 10th place. Players and MD were rightly disappointed with the result but did their best to enjoy the rest of the days peformances and commiserate afterwards with friends over a couple of refreshments! full results

A great concert by the band at St Teresa's Church in Cleveleys last Saturday was enjoyed by both the band and an almost full audience. One listener in particular enjoyed the concert and our CD so much she very kindly took the time to write to the Blackpool Gazette and let everyone know how good it was! Many thanks Mrs Riding! 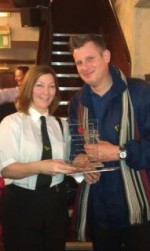 A tremendous performance of Variations on Maccabeus results in a 1st place in the 3rd section. 188 points saw the band take the honours with Trinity Girls in 2nd and Besses Boys coming 3rd. full results